Another Star review from PW

Hee Jun and his family have moved from Korea to West Virginia, where his father has accepted a teaching job. The whole family struggles: “In Korea, I was ordinary,” reflects the school-age boy. “I was not extraordinary, not different.” His grandmother, a “wise and wonderful teacher” in Korea, sits dull-eyed on their new front porch. After Se Ra, Hee Jun’s younger sister, “bites and kicks and even spits on her teacher,” it’s suggested that Grandmother attend school with her so they can both learn English. Yum’s (Puddle) colorful spreads carefully attend to the characters’ expressions, emotions, and relationships. Grandmother’s favorite Korean flower turns out to grow in the garden of Hee Jun’s new friend, Steve. “ ‘Rose of Sharon,’ Steve says. ‘It’s mugunghwa in Korea,’ I say. ‘It’s rose of Sharon here,’ Steve says.” When Hee Jun brings a sprig back to his grandmother, readers know it’s the beginning of an ordinary life for the family. Closely observed and greatly moving, Watts’s (Kizzy Ann Stamps) story is a useful springboard for discussions about difference and tolerance. Ages 5–8.Illustrator’s agent: Sean McCarthy, Sean McCarthy Agency. (June)

Posted by Hyewon Yum at 7:49 AM No comments:

A piece of Home -first review, with the STAR, from booklist

“In Korea, I was ordinary,” says Hee Jun, who chronicles his family’s move to America and their gradual assimilation into their West Virginia community. Though he arrives at school knowing no English, within a few months Hee Jun has made a friend and is learning the language. After his little sister, Se Ra, acts out, biting and kicking her teacher, her grandmother stays in class to help her adjust. Soon they’re both learning English. One of the endearing aspects of Watts' book is Hee Jun’s awareness of his grandmother, an honored teacher in Korea, and her initial sense of loss and loneliness, which fade as she learns the language, befriends Se Ra’s teacher, and finds familiar flowers growing in her new country. This gentle, compassionate immigration narrative shows the difficulties of adapting to a new culture. Unlike most picture books on the subject, its setting is contemporary and its intergenerational story reflects the struggles of several family members. Scenes in Korea are written in past tense, but once the setting shifts to America, present tense adds immediacy to the simply worded, effective storytelling. Yum, a Korean artist who moved to America, contributes sensitive and expressive watercolor illustrations. A perceptive portrayal of an important American experience. — Carolyn Phelan
Posted by Hyewon Yum at 5:45 AM No comments: 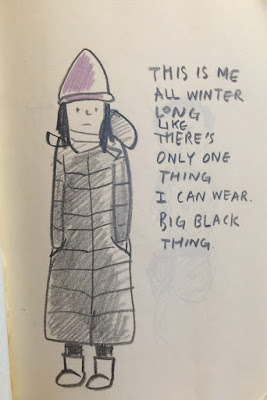 this is last year's sketchbook, and this year again I was in that black thing. Inside that thing I wear Pilates pants(Sahn thinks it's PJ)
I must be a hibernator, only difference with bears could be that they come out from the cave thin and weary, I came out fat and unhealthy.
I should come out from this cave real soon...

Hyewon Yum
Hyewon Yum is the creator of these picture books: Last Night, a Fiction Honorable Mention for the Bologna Ragazzi Award and winner of the Golden Kite Award for Picture Book Illustration; There Are No Scary Wolves, winner of the Society of Illustrators’ Founder’s Award; The Twins’ Blanket, a Junior Library Guild selection; and Mom, It's My First Day of Kindergarten!, a Kirkus Reviews Best Book of the Year. Hyewon Yum also received the Ezra Jack Keats New Illustrator Award for Mom, It's My First Day of Kindergarten! In 2019, Saturday is Swimming Day is named as an Charlotte Zolotow award honor. She lives in Brooklyn, New York.